I just realized that I missed the meeting to display the quilts.  Bummer.  I was really really excited to see what everyone had made.

I joined the Salt Lake Modern Quilt Guild in May, and I have enjoyed attending the meetings.  Two months ago, they gave us a charm pack of Kona Brights and challenged us to use one additional solid for the front to make this quilt.  So, this is my quilt.

I did intend for it to have a little improv feeling to it.  I initially cut the squares into three strips and sewed 1-inch white strips between them, resulting in a final strip .5 inches wide.  This made it so that the final block was still about 5 inches tall and 5 inches wide.  Then, I cut that block into three strips, cutting through the lines, and sewed those together again with another set of 1-inch white strips between.  This made a resulting 5 inch by 5 inch square (after “squaring it up”) and a # symbol.

Some of the colors had a darker value than the others, so I chose some of the darker blocks and cut them into 1-inch strips.  Then, I used four strips with a 5 x 5 square of Kona White in the same way as the other blocks to make these inverse # blocks.  I was also able to use the extra strips to make three multicolored # blocks.

I only had enough blocks to use 42 in the front, but I just had to include the other blocks and strips that I had.  So, I added them to the back with some Kona Tarragon, which added a whole 6 pounds to my quilt!

I quilted it with a maze/blocky meandering style free motion quilting pattern and bound it with Kona Ash, which was perfect because it framed the quilt without taking away from the color in the middle.

6 pounds in the back.

Thus the title, the 48-pound quilt.

Now looking for a 48-pound baby to give it to.

Thanks for stopping by! 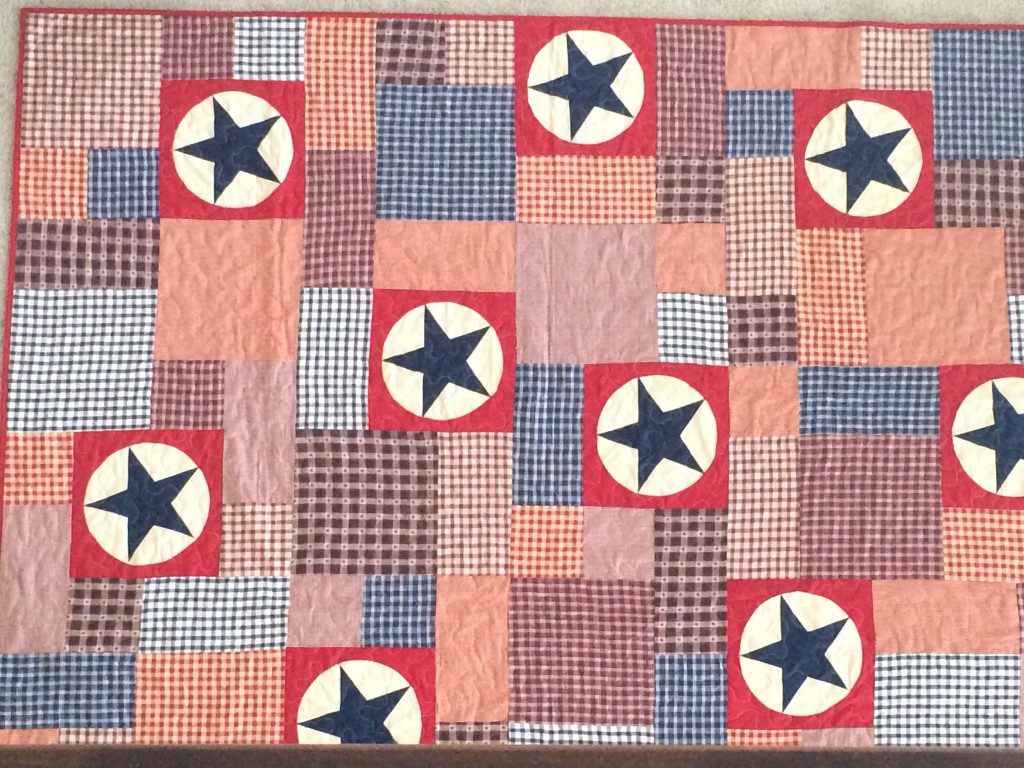 My kids’ teachers’ quilts are done!  This one is for a teacher who likes westerns and America.  I ...continue